I’ve decided that cold days and dark nights are not conducive to roaming the backwaters of the British railway network. Therefore there will be a hiatus until the weather becomes a bit more friendly – probably February. If you want to be the first to know when this blog springs back to life again, you can subscribe to my RSS feed in the reader of your choice. Alternatively, you can click the “Follow” button on this page to receive an e-mail the next time the site is updated.

In the meantime, here’s a shameless plug for another rail-related project I’m involved in. I am a member of the Friends of the 502 Group, a group of railway enthusiasts who have custody of two vintage electric train carriages. 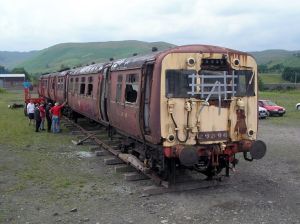 These two vehicles represent the the last surviving example of the Class 502 trains which ran on what is now Merseyrail’s Northern Line for the best part of 40 years. The 502s were built between 1939 and 1941 and were an early pioneer of features such as automatic sliding doors and the seating layout which became the de facto standard for suburban trains in the UK for the next 50 years. As such they are an important piece of British railway history and need to be saved for posterity.

Unfortunately we now find ourselves without a home as we have been asked to vacate the premises by our current landlords. The full story is over at the Friends of the 502 Group blog, but to summarise: we need money (a lot of it), and soon. We have just twelve weeks to raise £4,000.

We have an online donation page. Any amount, no matter how small, would be appreciated.

Thanks, and see you in the New Year.