I was back at Truro station the next morning ready for the 0920 departure down the Falmouth branch – or the Maritime Line, as the marketing people would like you to call it.

My goals were similar to those of the previous day’s Looe Valley roving – visit all the stations on the line. I had carefully done my research prior to coming down to Cornwall, and ascertained that the Maritime Line Ranger would suit my purposes.

Unusually, the booking office clerk did not flinch when I asked for a Day Ranger ticket. What came out of his ticket machine, however, was not a Ranger, but a normal Off Peak Return ticket to Falmouth Docks. I queried this with him.

“The Maritime Line Ranger doesn’t exist any more, but you can use the return like a Day Ranger,” he said. “Just don’t put it in the ticket barrier when you come back here, or it’ll swallow it,” he added helpfully.

Well, that makes perfect sense. Okay then. I suspected this explanation was a lie told to get rid of me – if it was, it worked, because I accepted it and left the ticket office.

A study of the Maritime Line timetable quickly revealed that I would have no issues with Parliamentary stations or uneven service frequencies today. The Truro to Falmouth Docks line is no meandering, sparsely-served branch – indeed, passengers at stations along this route are surprisingly well-provided for, thanks to recent investment by Network Rail and Cornwall County Council. After many years of an hourly or worse service, train frequency was boosted to two per hour in 2009, when a new passing loop was provided at the halfway point, enabling two trains to operate on the branch at the same time (there’ll be more on this in the next blog post).

One station that hasn’t benefited from the increase in services is the first stop on the line from Truro: Perranwell. Not only does it retain an hourly service, with half the trains on the line skipping the station, but it is a request stop to boot. It was the one awkward spot on the day’s plan, and I was glad to be getting it out of the way early.

END_OF_DOCUMENT_TOKEN_TO_BE_REPLACED

Compared to the ambling Looe Valley Line train, the Cornish Main Line express was positively Shinkansen-like in its speed. The train was running late due to problems in the Exeter area, but we made up a few minutes and 45 minutes later we were nearing Truro.

The approach to Truro is great – the line is on a viaduct, giving a bird’s eye view of the town. With houses and roads far below you, it’s almost like you’re on a plane coming into land. It’s a genuinely impressive sight – so impressive, in fact, that I forgot to take a picture. Oops.

Truro station is fairly standard for an intermediate station on a main line. It’s a functional structure, with two through platforms and a single bay platform at the western end of the station, for the branch line services. There’s a full quota of cafés and shops which seemed to be doing good business.

The station buildings are a bit of a hodge-podge, with a modern frontage bolted on to something much older. 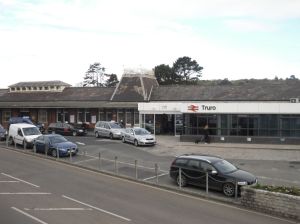 END_OF_DOCUMENT_TOKEN_TO_BE_REPLACED

The train ambled back north along the Looe Valley Line, taking me back to my starting point, Liskeard (pronounced “Lis-card”, obviously).

No calls at any of those lovely little halts on the way back: Sandplace, Causeland and St Keyne all passed by unnoticed. Then we reached Coombe Junction – no stop at the station this time, the driver and guard donned their high-vis vests, operated the points, changed ends and set off again.

As we headed for the end of the line, the single-coach train had to work hard for the first and only time on its journey. The noise and vibration from the underfloor diesel engine increased noticeably as we attacked the steep gradient. The wheels too, complained bitterly – squealing as they followed the tightly curved track. Finally the din subsided and the train rolled up to the buffers of the branch platform at Liskeard.

END_OF_DOCUMENT_TOKEN_TO_BE_REPLACED

I decided not to wait for the next train at Sandplace, instead setting off for Looe via the most obvious and direct walking route – the A387 road. This decision turned out to be a slightly life-endangering one, for the road has no safe haven for pedestrians – no pavement, and not even a grass verge for parts of its length. I was forced to walk on the road itself – remembering, of course, the Highway Code’s stern warning to keep on the right so I face oncoming traffic.

The road is quite narrow and features a few blind bends, which didn’t seem to trouble the numerous buses, lorries and the occasional tractor, who zoomed past as quickly as possible. At one point, I saw a police car approach, and I’m pretty sure it slowed down to let the officers inside get a good look at me. Perhaps they had received a report of a lunatic on the road (not altogether inaccurate).

The railway line runs parallel to the road, but at a lower level, and it is largely hidden by trees, greenery, and (according to signs at the roadside) Japanese Knotweed.

I saw a sign declaring Welcome to Looe, and thought my ordeal was at an end, but no – there was another good mile or so of trudging before I finally reached the actual edge of town and the relative safety of an actual, clearly delineated pedestrian walkway.

Roads and walking are bad, kids. Stick to the train.

END_OF_DOCUMENT_TOKEN_TO_BE_REPLACED

The Looe Valley Line service is provided by a single train shuttling up and down the branch. I assumed this meant the same train crew would be on duty all day and was prepared to blush a little while explaining my odd obsession to the guard. After all, I had already made myself stand out by boarding the train at Coombe Junction Halt.

As it turned out, the friendly female guard from earlier had disappeared and a different person was now on duty. No conversation required, just a request to get off at the next station. Cringing avoided, for now at least.

Sandplace is the penultimate station on the Looe Valley Line. This one offers quite extravagant passenger provision – not just a waiting shelter in the same faux-GWR style as found elsewhere on the line, but also a small garden with a picnic table. It really is quite lovely. 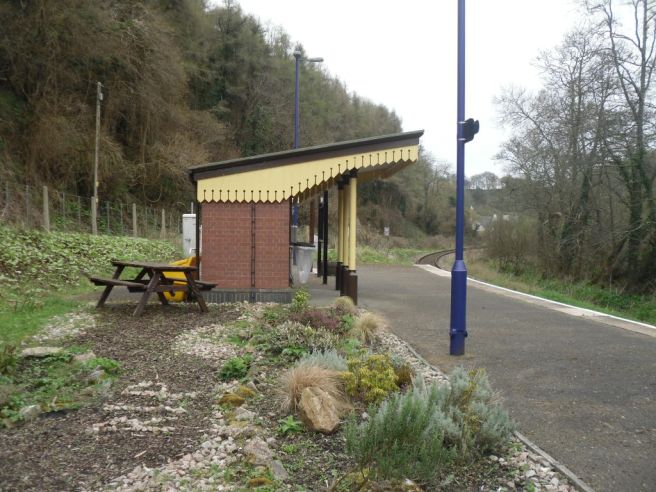 Beyond Sandplace, the railway runs onto a causeway with water both sides. It’s an intriguing bit of engineering, which was more or less forced on the line’s builders because of the course of the river along the valley floor.

No time to hang around and study the construction though, as I decided to make way to Looe on foot rather than wait for the next train. 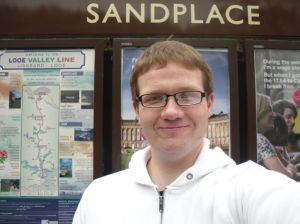 The entrance to Sandplace station is quite unforgiving. Once out of the gate you are immediately on the main road with not even a bit of pavement to protect you. Undaunted, I set off. My first walk, from St Keyne to Causeland, had been quite pleasant, and I assumed that this would be the same. I was wrong…

The Liskeard to Looe branch was earmarked for closure by Doctor Beeching, but was reprieved just two weeks before the last train was due to run. Reportedly this was because of concerns about the state of the roads in the area, which would have made it impossible to provide a reasonable replacement bus. Walking the road between St Keyne and Causeland stations, I could understand the problem; the single-track road was very narrow. Cars were few and far between, but when one did appear I had to scramble onto the narrow grass verge to let them pass safely.

The road veers away from the railway, leading uphill, past the wishing well mentioned in my previous post, and into a land of trees and greenery. There are isolated farmhouses and a couple of small B&Bs, but little else. 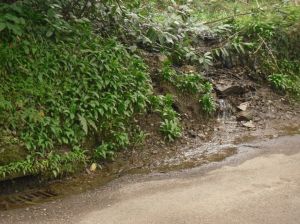 At one point the road crossed a stream. Rather than build a bridge, the water was apparently left to just gush into the road and then down a nearby drain. That isn’t something you see every day. Unless of course you live here.

I was a little concerned about getting lost, but there was only one point on the whole walk where I was faced with a choice of paths to follow, and even then the decision was obvious: I took the road which led back down to the valley floor. My decision was proved correct when the trees thinned out and I could see the railway line again. A few minutes later I saw the signpost for Causeland station.

END_OF_DOCUMENT_TOKEN_TO_BE_REPLACED 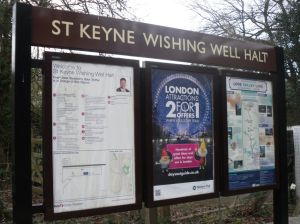 Just a few minutes after getting on the train at Coombe, it was time for me to alight again, as we pulled into the next station on the Looe Valley Line. I actually waved goodbye to the guard as the train departed, a level of friendliness from me which is quite abnormal. It must have been the country air.

I was at St Keyne Wishing Well Halt, a station name which could have come straight out of an Enid Blyton novel. I half expected to see a load of kids with amusing names like Dick and Fanny, along with several unpleasant racial stereotypes. 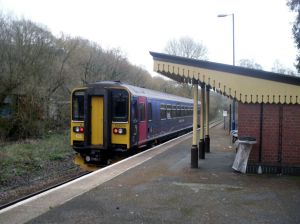 “Halt” is a railway term which has fallen into disuse. In times gone by it signified a station with no staff and only rudimentary passenger facilities. Of course, nowadays that description applies to half the stations on the network, so the word is usually unnecessary. St Keyne is one of only two stations on the whole National Rail system which still has the suffix applied. I can’t remember where the other one is.

St Keyne is certainly a simple station, but it’s clean, tidy and ample for the handful of passengers who use it. Even without the name, it would be a charming place, helped no end by the copious use of Gill Sans on the replica signage, and the Great Western Railway emblem embedded in the metalwork of the bench on the platform. END_OF_DOCUMENT_TOKEN_TO_BE_REPLACED

Tuesday morning, the first proper day of my holiday. After a peaceful night’s sleep in a comfortable Premier Inn bedroom, I was ready and raring to go.

It’s very easy to get up at 7am when I know I don’t have to go to work. I was showered, dressed and scoffing a Cornish breakfast in the hotel dining room within 30 minutes of my alarm going off. Then it was into a taxi which carried me through the narrow streets of Liskeard, nearly coming a cropper when the driver decided to take a shortcut, only to find his road completely blocked by a bin lorry which showed no signs of moving. One hasty reversal later and we were soon at Liskeard station.

I went to the ticket office where the clerk was flustered by an elderly couple wanting to book Advance tickets with Disabled Railcard discount for a future journey to Paddington. She was equally bewildered by my request for a Looe Valley Explorer ticket, but eventually found it on her computer. She admitted that she was new to the job. Happy to provide the baptism of fire.