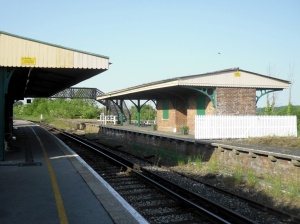 Brading has two platforms, although only one has track these days. The passing loop here was removed in 1988. Ever since then, the positioning of the remaining double track sections has left the line with a lopsided service pattern of 2 trains per hour, separated by a gap of 20 or 40 minutes.

The disused platform and signal box have been reopened as a small visitor centre, although I arrived after it closed at 4pm, so had to content myself with photos taken from a distance. It took me a few minutes to work out that the man in the signal box was, in fact, a dummy. Dummy. 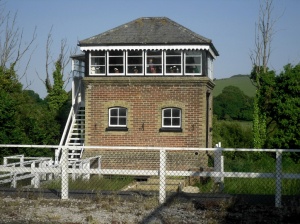 The station is well looked after, and it was good to see the canopy still intact. Its ornate ironwork incorporates the monogram of the Isle of Wight Railway, the pre-Grouping company which operated this line. 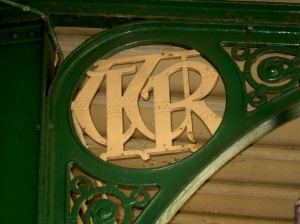 END_OF_DOCUMENT_TOKEN_TO_BE_REPLACED

As outlined in my previous post, the Isle of Wight Steam Railway had proved more taxing than expected. I was back on Island Line now, consulting the timetable to work out the best way to get all the stations. I barely noticed the schoolchildren who invaded the train at Sandown, boisterous in the way that schoolchildren generally are.

I was still feeling a bit miserable, and Lake, the next station I visited, did little to cheer me up. It’s a relatively new station, opened in 1987. Of course, that means it’s as perfunctory a structure as you can imagine, with just a single wooden platform and a tiny bus shelter to provide protection from the elements.

In an attempt to cheer the place up, the South East Wight Rangers had painted a mural in the adjacent underpass. It was a valiant effort, but it’s a shame to see that it has been damaged by scorch marks and rust stains. It also couldn’t disguise that unique eau de latrine that pervades railway underpasses all over the country.

END_OF_DOCUMENT_TOKEN_TO_BE_REPLACED 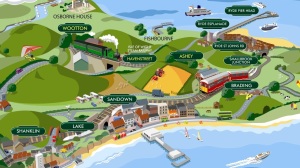 The Isle of Wight actually has two railways: the Island Line with its quaint 1930s electric trains, and the Isle of Wight Steam Railway, with quaint 1900s steam trains. Check out the map to the right, which looks like something from the Island of Sodor, but does in fact come from the South West Trains web site.

My aim was to visit every station on the line, steam and electric. Taking into account that Ryde Pier Head and Shanklin were ticked off the previous day, that left me nine stations to “do”. I thought that this would be easily achievable in one day. The Island Line is less than 30 minutes end to end, and for most of the day has two trains per hour (albeit at slightly awkward 20/40 minute intervals). The steam trains run less frequently, but with only four stations on this section to capture, I didn’t consider that a major obstacle. Even so, I decided to get to the steam section first, to get it out of the way.

On Thursday morning, I strolled to Shanklin station in glorious sunshine. The cloudless sky and warm temperatures would persist all day (I later discovered that the Isle of Wight had been the warmest place in the whole UK that day, with temperatures peaking just shy of 25 C). I don’t fully appreciate bright sunshine, thanks to my fair-skinned complexion. I don’t go nicely tanned like most people, instead simply skipping straight to the overcooked lobster phase. I ventured out in shorts and T-shirt, but also applied some factor 200 (I think) sunscreen. Well, it was either that or a beekeeper’s outfit.

A joint “Island Liner” day ranger ticket is available for the princely sum of £15, allowing unlimited travel on both companies’ lines. I turned up at Shanklin station on Thursday morning to purchase it. Immediately in front of me in the queue was an elderly gent, who engaged the booking office clerk in some genial conversation:

“All right, mate, how are you this morning?”
“Fine, thank you. And yourself?”
“I didn’t sleep too well, I heard some strange noises during the night.”
“Oh, I’m sorry.”
“Strange banging sounds coming from the station.”
“Oh, that’s odd. I just need to serve this customer.” (he gestures to me)
“Yes, they were strange noises, you might want to check that out.”
“OK, I’ll check the CCTV. But I need to serve this gentleman.”
“Oh?” (turns around, notices me) “OHH! Well, I’ll let you get on then.”

The clerk gave me a weary look. I suspect he speaks to this man quite a lot.

END_OF_DOCUMENT_TOKEN_TO_BE_REPLACED

Exams. They suck, don’t they? You study like crazy for weeks beforehand, spending long evenings cramming as much knowledge into your brain as possible. Then you get to the exam hall and find, on opening the paper, that the one subject area you’re not too confident on is responsible for about 10% of the total mark. Gahhh.

That happened to me last week, but the horrible experience is behind me now. What better way to reward myself for all my “hard” “work” over the past few months, than a trip to a far-flung part of the UK for a Station Master trip? Well, it was either that or run naked through Liverpool city centre, screaming primally at the top of my voice. On reflection, I think I made the right decision.

So it came to pass that, on the morning of Wednesday 5th June, I found myself setting off on a long journey via London to Portsmouth, to reach the Isle of Wight and its eight-and-a-half mile railway: the Island Line. 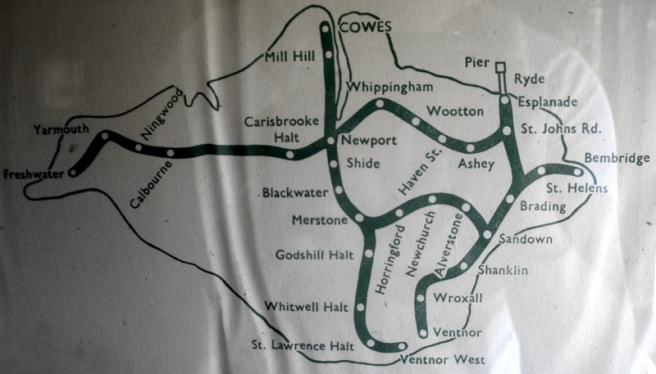 The Isle of Wight had a comprehensive network of railway lines until the mid-1960s, as seen in the map above. The Beeching cuts hit the island hard, however, and by the end of that decade only a single line survived down the east coast, linking the seaside towns of Ryde and Shanklin.