I was feeling cocky as my train powered through the Lancashire countryside en route to Bolton. The day had gone perfectly so far: I’d had a good couple of hours at Hebden Bridge; Salwick station had been successfully bagged; and I’d managed to get a bonus sugar rush from a very sweet Mars milkshake that I’d bought on impulse from the WHSmith shop on the platform at Preston.

I thought the rest of the afternoon would be nice and straightforward. All I had to do was get to Salford Crescent in time for the 1743 to Wigan Wallgate, one of the two trains each day which stop at Clifton.

I was feeling especially smug after spotting that, by taking an earlier train from Preston and changing at Bolton, I would get to Salford earlier than if I took the direct Preston to Salford train. I would have a twelve minute connection into the 1743 – ample for Salford Crescent’s single island platform.

It was an uneventful run to Bolton, where I duly alighted and searched the departure board for my next train. My heart sank: the Manchester Airport train I needed was running late.

Twelve minutes late, to be precise.

END_OF_DOCUMENT_TOKEN_TO_BE_REPLACED

That was the reaction from the apologetic staff member at the coffee kiosk at Preston station. I found it slightly bizarre that they would start to switch off the equipment at around 3.30pm when the platforms were still teeming with passengers – especially when the server directed me to a rival café at the other end of the platform and told me to give my money to them instead. These are the sort of decisions that make sense to people in distant head office.

Having finally tracked down a chocolatey beverage, I took a moment to study the timetable for my next destination: Salwick. 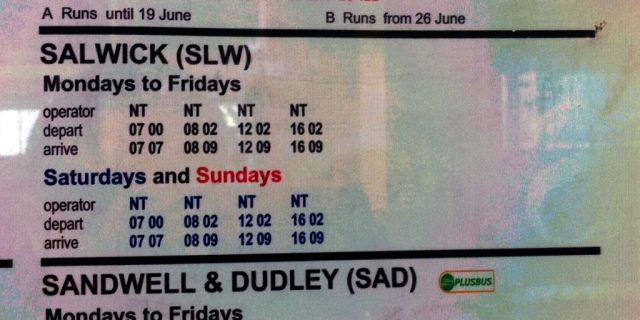 I am already a compulsive nail-biter, but this section of the trip had me nervous enough to chew off my entire fist. I was about to get on board the 1602 to Blackpool South, which would drop me off at Salwick at 1609. My return journey from Salwick to Preston (the last train of the day) was due to depart at 1615. Therefore I had just six minutes to grab my pictures and get back to the train. If I dawdled, I would find myself stranded in the village, facing either a hefty taxi bill or the prospect of camping outside the British Nuclear Fuels plant overnight.

END_OF_DOCUMENT_TOKEN_TO_BE_REPLACED 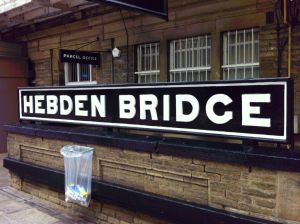 Mission creep is a terrible thing. There’s nothing worse than a successful project going awry because the original parameters of the mission change for no valid reason. That’s why, with this blog, I was determined to stay on-topic, and visit only those stations that fit within my original brief: namely, the limited service stops (the “Parliamentary” stations), leaving the more glamorous locations to the likes of Michael Portillo and Victoria Wood.

Now, however, on only my second Station Master excursion, I found myself creeping all over the place. My initial plan for the day involved two limited service stations (of which more later). However, neither of them seemed particularly inspiring locations and could be bagged in just a couple of hours. I wanted something a bit more interesting to fill up my day and extract the maximum value possible from my Lancashire Day Ranger ticket.

Therefore, I found myself at Lime Street station at 10.30am on Saturday morning with an initial target of Hebden Bridge. I have visited this station previously (in fact, the header image of this blog is a photo of the station taken by me in 2006) and fell in love with its charmingly retro look. Back then I didn’t have much time then to explore the place, so this time I deliberately set aside a couple of hours in my itinerary to explore the station and a bit of the town itself.