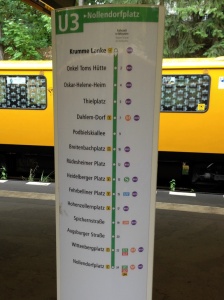 I spent last weekend in Berlin, easily one of my favourite cities to visit. I checked out landmarks, visited museums, loitered in gay bars and generally soaked up the cultural vibe.

Berlin is renowned for its excellent public transport system. The city is criss-crossed by a dense network of rail routes: the U-Bahn (underground) and S-Bahn between them cover most of the city and parts beyond. Until now, though, I had always ridden the system purely for practical reasons: to get from A to B (or should that be Ä to ß?).

On Saturday morning, however, I decided to put my Station Master hat on and take a ride on the U-Bahn just for the hell of it, and to provide some content for this blog and its increasingly broad remit.

I chose to ride on line U3, for several reasons. First, it’s relatively short (just 7.5 miles) and I reasoned I could cover its 15 stations easily in one morning. Secondly, its one of the oldest parts of the network (opened in 1913) and I thought it may yield some historical secrets. I was right on both counts.

I was amazed to find that my train, when it pulled in to the station, was only two coaches long. Yes, it was Saturday morning and fairly quiet (despite the short length, nobody had to stand at all), but for someone more accustomed to the never-deserted London Underground, it was startling. The train I was riding on dated back to the early 1970s, which perhaps explains why every surface was covered by a mahogany veneer. 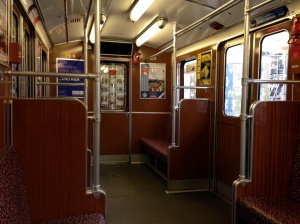