Mission creep is a terrible thing. There’s nothing worse than a successful project going awry because the original parameters of the mission change for no valid reason. That’s why, with this blog, I was determined to stay on-topic, and visit only those stations that fit within my original brief: namely, the limited service stops (the “Parliamentary” stations), leaving the more glamorous locations to the likes of Michael Portillo and Victoria Wood.

Now, however, on only my second Station Master excursion, I found myself creeping all over the place. My initial plan for the day involved two limited service stations (of which more later). However, neither of them seemed particularly inspiring locations and could be bagged in just a couple of hours. I wanted something a bit more interesting to fill up my day and extract the maximum value possible from my Lancashire Day Ranger ticket.

Therefore, I found myself at Lime Street station at 10.30am on Saturday morning with an initial target of Hebden Bridge. I have visited this station previously (in fact, the header image of this blog is a photo of the station taken by me in 2006) and fell in love with its charmingly retro look. Back then I didn’t have much time then to explore the place, so this time I deliberately set aside a couple of hours in my itinerary to explore the station and a bit of the town itself.

The first frisson of excitement came when I reached Manchester Victoria and found a Class 144 DMU waiting to form my train. Pacer fans (you’re out there somewhere, I know it) will recognise these as the 4th and final evolution of British Rail’s unpopular railbus design. They’re common around the West Yorkshire area, but it’s rare for them to venture as far as Manchester, and this would be my first time ever riding one. I don’t mind telling you, I was excited (side note: I’m single).

They certainly look less like a bus, but this example still rode like a shopping trolley with a wheel missing, and the seat legroom provided would have given even Ronnie Corbett cause for complaint. Still, with 3 coaches there was at least plenty of capacity as we bounced and swayed our way across the Pennines.

I spent most of the journey happily tweeting away. So preoccupied was I with my iPhone, in fact, that I was mid-Tweet when I saw the Hebden Bridge nameboards out of the window and had to hastily gather up my things for a swift exit.

So, was my memory playing tricks or is Hebden Bridge station really a lovely place? No, and Yes. 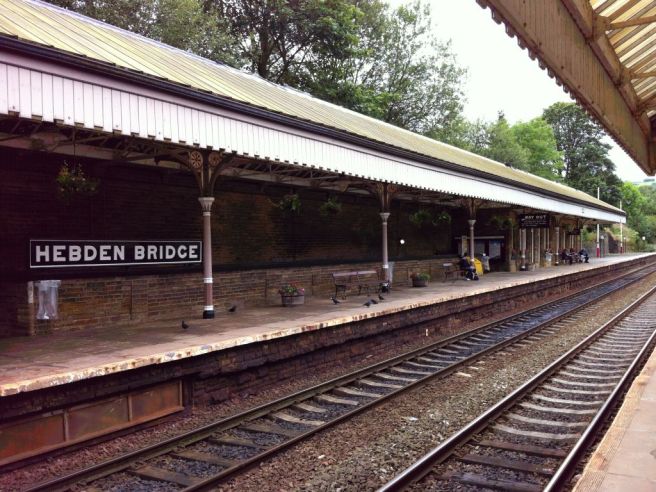 The station really looks like something from a preserved line. Were it not for the occasional sign with a MetroTrain logo on it, you could be forgiven for thinking you had slipped through a time warp and ended up in 1900.

The signage isn’t actually 100% authentic – most of the signs are replicas in the style of the Lancashire and Yorkshire Railway, installed during a refurbishment of the station in the mid-1990s. That minor detail doesn’t spoil the overall effect: this is a station which has gone out of its way to evoke a bygone era. It just about manages to avoid being annoyingly overdone, and instead looks quite charming.

And of course there is a Friends of Hebden Bridge Station group – no self-respecting station should be without one! The group have commandeered the waiting rooms on both platforms for a display of photos, portraying not just Hebden Bridge, but the whole history of the Caldervale Line. It’s a further nice touch and certainly a good way to while away a few minutes while waiting for your train. To complete the effect though, that fireplace needs to have an actual fire in it.

The station building, dating from 1893, is another nice bit of architecture. It’s reassuring to see that it is still in use and serving the purpose for which it was built, unlike so many other stations whose grand Victorian buildings have been boarded up, or (worse) converted to pubs.

I was also glad to see that some effort has been made to integrate train services with the local bus operations, with a constant stream of “MetroConnect” buses pulling up and departing from the bus stop outside the station every few minutes. Bus/rail integration in this country is still too often an afterthought, and if your local rail station has a bus stop outside, it’s usually by good luck rather than deliberate planning. Hebden Bridge is not going to rival Liverpool South Parkway in the bus-to-rail interchange stakes, but it was good to see an effort being made.

I chuckled at the sign for the local taxi firm, whose slogan was dreamt up by someone who either really likes the League of Gentlemen, or has never seen it and is unaware of the unfortunate associations that this phrase conjures up. 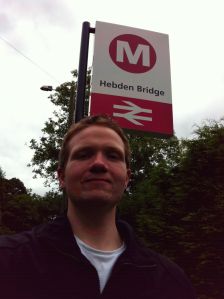 To business, then. I toddled on down to the main road to get the required station sign picture. I don’t seem to have quite mastered the art of actually smiling for photos yet.

Job done, I strolled into the town centre to explore further.

I walked for a while along the canal towpath, where a series of boats (many with appalling punny names such as “Above Bored”) were moored. I’ve been a fan of canals ever since the first time I saw Rosie and Jim on CITV. Sadly Fizzgog was nowhere in sight today. I can imagine that living on a boat has its attractions, although judging by the number of satellite dishes I saw rigged up on the sides of boats, boredom is still a problem.

I was now in the town centre, and I liked what I saw. There are plenty of independent traders – the only chain stores I saw were a Co-operative Food and a couple of banks). Well-kept cafés and pubs tempted me inside with their food offerings, and all appeared to be doing a roaring trade. And the town itself looks lovely, with Victorian streets meeting in a modernised town square. There is even a small cinema. As is right for a Saturday afternoon, the town was bustling with people.

There were plenty of places to eat, but time was ticking away and I was eager to get back to the station for my next train. Being the classy guy that I am, I bought fish and chips from a takeaway on Crown Street and headed to the park to eat them.

Fun fact: in a survey carried out in 2004, Hebden Bridge had the highest number of lesbians per head in the UK.

I walked back to the station pleased that I had taken the time to look around. I actually left the place feeling slightly happier and more optimistic than when I arrived. Hebden Bridge felt like a town with a heart and a unique identity. I was almost sad to leave and board my next train heading for Preston.

Incidentally, if anyone has any theories as to what was going on in the picture below, I’d love to hear them.

6 thoughts on “A Hebden Bridge too far”