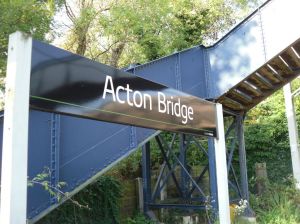 I wish I could have recorded the noise made by the booking office clerk at Aigburth station when I asked for a Cheshire Day Ranger. It’s hard to describe, but was a sort of “ooh” – not, “ooh no, I’m going to have to search through 15 different menus to find it on my ticket machine,” but, “ooh that’s an interesting ticket I’ve never heard of.”

Having successfully acquired my ticket, I set off for Liverpool South Parkway for an onward connection to Crewe. My goal was Acton Bridge, a small Cheshire village with a small station to match.

This is probably going to be my last Station Master trip this year. Autumn brings with it short days and wet weather, as well as those pesky falling leaves that make train travel so unpredictable. However, I decided to go out for one last hurrah, an ambitious trip to bag a few more (relatively) local stations before going into hibernation. I like to keep my audience interested. Also, I didn’t want to leave the phrase “FUCKING CUNT” floating at the top of my blog for the whole winter.

When I arranged, a few weeks ago, to take September 30th off work, I had no idea what the weather would be like. Autumn can be a wild time and there are no guarantees – sunshine can turn to pouring rain and back again in the space of a few hours. I was thrilled, therefore, when a mini-heatwave struck in the final few days of September, and my train raced through the Cheshire countryside under cloudless skies and a blazing sun. It was barely 9.15am but already it was getting very warm.

Getting to Acton Bridge required careful planning. Although it is on the West Coast Main Line with trains roaring past every few minutes, only a few trains on London Midland‘s Liverpool to Birmingham route actually call. Rather than wait for a direct train, I decided to get an earlier service to Crewe, then retrace my steps on a stopping train. At 10.16am I arrived at my first Station Master target of the day. 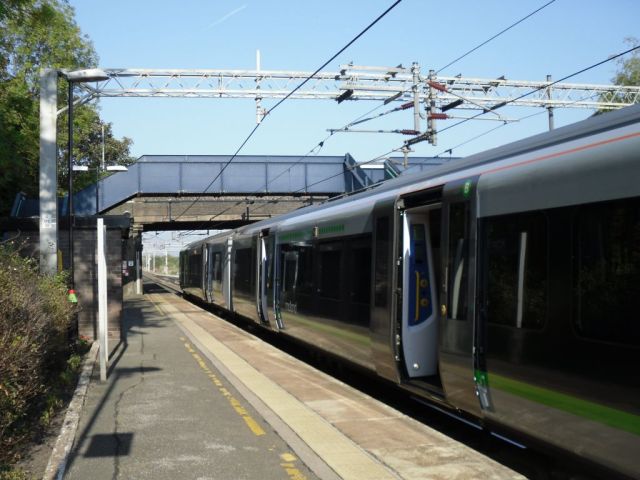 I had pondered whether Acton Bridge qualified to be included in my itinerary at all. Its service (eight trains per day Monday-Friday, five trains on Saturdays) is much better than some of the other stations I’ve visited or are planning to go to. In fact, I’ll stick my neck out and say that it’s actually useable. There are two departures an hour apart in the morning peak and equivalent evening return journeys, allowing 9-to-5 commuters to travel to work. The few daytime journeys which run are more than suitable for shopping excursions. There is also a late-evening service Monday to Friday which means Acton Bridgians can have an evening out in Liverpool and return home by train. 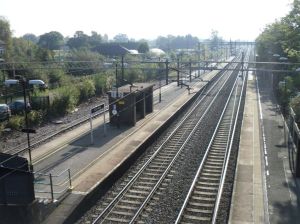 The un-Parliamentary nature of the station was underlined when I alighted from the train and saw other people get on. Yes, people actually USE the station. This will never do.

In the end I rationalised my decision by focusing on another quirk of the station – although Acton Bridge is on the West Coast Main Line, it is impossible to travel to Warrington Bank Quay, the next station north, as there is no direct service (you must double-back via Crewe, or travel via Liverpool South Parkway to Warrington Central).

The station building housed the shuttered-up remains of a ticket office, and also a hidden prize – a genuine British Rail Permit to Travel machine. They used to be common at unstaffed stations in Penalty Fares areas – the idea being that you put in some coins and get a slip of paper to prove to ticket inspectors that you’re not a filthy fare dodger, honest. They have gone out of fashion somewhat as more stations get fully-functional ticket machines, but this one was still active. Unfortunately it rejected any coins I tried to put in it, so I couldn’t get a souvenir permit from the machine. 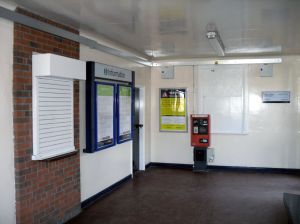 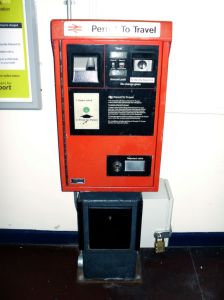 The station entrance is located on a terrifyingly narrow road bridge over the railway line. I braved the medium-sized lorries which were taking the blind bend far too fast, and grabbed some photos.

Acton Bridge doesn’t have a large totem sign, so I had to settle for the nameboard on the station building.

As with many small stations, a community group tends to the station. Their efforts have not gone unnoticed: Acton Bridge won a Cheshire “Best Kept Station” award in 2003. It still looks well-cared for and it’s pleasing to see such a minor station being looked after in this way – a pleasant station environment, even at a station with a limited service, can leave a lasting good impression on potential travellers.

So that was Acton Bridge. I liked it. Whereas many of the stations I’ve visited so far have been neglected and depressing, this one had a different, positive feel to it. Yes, it has an infrequent service, but given the size of the place it serves, that is reasonable enough. It’s certainly a lot better than the token bare minimum service that many other stations get.

By now it was 10.30am, but with no train due until 12.14, I set off for my next destination using that most unnatural of conveyances… a bus.