The train ambled back north along the Looe Valley Line, taking me back to my starting point, Liskeard (pronounced “Lis-card”, obviously).

No calls at any of those lovely little halts on the way back: Sandplace, Causeland and St Keyne all passed by unnoticed. Then we reached Coombe Junction – no stop at the station this time, the driver and guard donned their high-vis vests, operated the points, changed ends and set off again.

As we headed for the end of the line, the single-coach train had to work hard for the first and only time on its journey. The noise and vibration from the underfloor diesel engine increased noticeably as we attacked the steep gradient. The wheels too, complained bitterly – squealing as they followed the tightly curved track. Finally the din subsided and the train rolled up to the buffers of the branch platform at Liskeard. 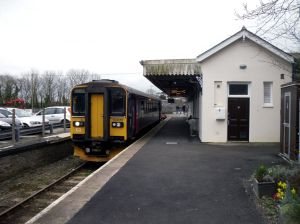 Any review of the Looe Valley Line wouldn’t be complete without Liskeard itself of course. Mention needs to be made of the slightly bizarre arrangement at this station. Although this station is where passengers interchange between the branch trains and the Cornish Main Line, there is no physical connection between lines here – the actual junction is a little way further down the line. Instead, the Looe Valley platform is at a right angle to the main line, and passengers must leave the main station and cross a road to change trains.

Like the other stations on the line, the branch platform has been done up in the style of the British Railways Western Region of the 1950s. The one concession to modernity is the digital “next train” display (hint: the next train is for Looe). 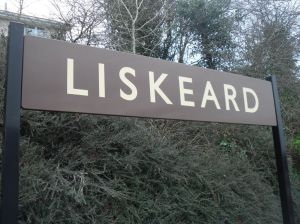 On the platform, benches have the logo of the Great Western Railway embedded in their metalwork.

There is a certain faction of the railway enthusiast community which gets slightly moist when the initials “GWR” are mentioned, and I can sympathise with that view to some extent. The company was one of the pioneers of the railway industry, running its first train in 1838 and surviving right up to the 1948 nationalisation.

It really was a mammoth undertaking, with routes stretching from London Paddington right across a huge chunk of South West England, Wales, the Midlands and beyond, reaching as far north as Birkenhead. The name became a byword for quality which the current franchisee, First Great Western, tries to piggyback on (not always successfully).

The overall 1950s effect is a bit ruined by the giant red Biffa bins at the entrance to the platform.

I had an train to catch onward to Truro, which was running late, giving me a bit of time to explore – but not before capturing my arrival at the station for posterity. Again there was no big totem – there seems to be a bit of an allergy to them in these parts – but I made do with this pose under the canopy at the ticket office.

Liskeard itself is a pleasant enough place, although it could do without the ugly A38 expressway, which slices along the edge of the town, neatly cutting off the station from the place it serves.

The “main line” platforms are slightly more modern, but even with First Great Western corporate branding everywhere, you can’t help but feel like you’re in a bit of a timewarp. Semaphore signals abound, all controlled the old fashioned way, by a man pulling levers and ringing bells in the adjacent signal box.

The trains themselves are also a throwback to happier times on the railway. The express services are provided by the InterCity 125 – the best train British Rail ever produced and still soldiering on well into their fourth decade. They are finally due to be replaced in the next few years, but for now they continue to ply their trade between London and points west on a daily basis.

My train, when it finally arrived, was busy, and it took me a while to find a seat. To Truro, then, and time to get another Cornish branch under my belt.

5 thoughts on “Playing the Liskeard”