Just a few minutes after getting on the train at Coombe, it was time for me to alight again, as we pulled into the next station on the Looe Valley Line. I actually waved goodbye to the guard as the train departed, a level of friendliness from me which is quite abnormal. It must have been the country air.

I was at St Keyne Wishing Well Halt, a station name which could have come straight out of an Enid Blyton novel. I half expected to see a load of kids with amusing names like Dick and Fanny, along with several unpleasant racial stereotypes.

“Halt” is a railway term which has fallen into disuse. In times gone by it signified a station with no staff and only rudimentary passenger facilities. Of course, nowadays that description applies to half the stations on the network, so the word is usually unnecessary. St Keyne is one of only two stations on the whole National Rail system which still has the suffix applied. I can’t remember where the other one is.

St Keyne is certainly a simple station, but it’s clean, tidy and ample for the handful of passengers who use it. Even without the name, it would be a charming place, helped no end by the copious use of Gill Sans on the replica signage, and the Great Western Railway emblem embedded in the metalwork of the bench on the platform. 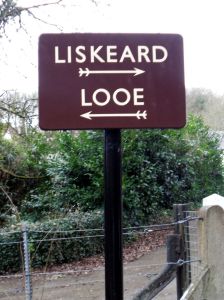 Like many country stations, St Keyne is some distance from the village it serves. The only facility in the immediate vicinity is Magnificent Music Machines, a museum dedicated to the Wurlitzer organ. Sadly, being out of season, it was closed. 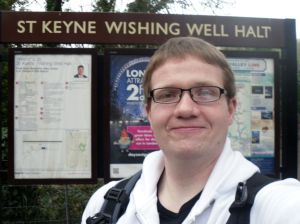 Again, there was no big BR totem at the station entrance, so I got a picture of my good self gurning beneath the nameboard on the platform. At the time I was quite pleased that it only took me two attempts, but now that I look at the pictures again (on a 1280×1024 monitor rather than a tiny camera screen) I wish I’d had a few more goes.

Rather than wait for the next train (over two hours away), I “did a Mersey Tart” and decided to walk to the next station. I had bought the Ordnance Survey map of the local area specifically for this event, which proved to be wise, as the patchy mobile phone reception rendered my usual navigation tool – Google Maps on iOS – useless. I was able to read the map, thanks to half-remembered school geography lessons (thank you Mr Whitehead) and easily identified precisely which narrow single-track roads I needed to use to get to the next station.

About 15 minutes into my walk I encountered the wishing well after which the station is named. 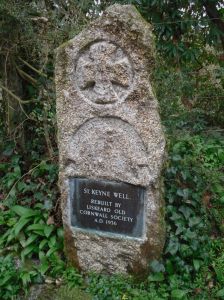 Naturally I tossed a coin in (only 5p, I’m not made of money you know) and made a wish. The common superstition states that I am not supposed to share what my wish is – suffice to say if a certain Premiership footballer shows up naked at my house one day, I’ll know it’s worked.

6 thoughts on “St Keyne as Mustard”