Having sampled Falmouth’s delights, it was time to head back to Truro, starting from the terminus of the Maritime Line – Falmouth Docks.

I headed into the eastern end of town, slavishly following the little blue dot on my iPhone Google Maps display. I was a bit concerned that all the road signs seemed to point to dead-end dock access roads, but a row of terraced houses labelled “Railway Cottages” showed that I was heading in the right direction, and a few minutes later I found Falmouth Docks station, tucked away down an unassuming side street.

A narrow footpath ran between the station and a prefabricated metal building (which turned out to be, somewhat incongruously, an amusement arcade). From this path, by leaning precariously over the railway fence, I was able to get a good shot of the station.

There is a definite sense of faded glory here. At one time, Falmouth Docks boasted three tracks and two platforms, with refreshment rooms and a hotel – not bad for a branch line terminus. Passengers would stream off the trains and onto the packet ships docked in the adjacent harbour. Now, there is just a single track with one platform. The only passenger facility is the canopy, which looks grand but is ridiculously out-of-scale with the two-coach Sprinters that use the station these days.

Just outside the station, some tracks branched off from the main line. Presumably at one time they carried freight traffic to the busy docks, but now they are just rusty rails leading to a weed-encrusted dead end. Any freight for the docks arrives by road these days.

For a short time in the ’70s there was no passenger service at all here. When the Town station opened in 1970, Falmouth Docks (then just called “Falmouth”) was deemed surplus to requirements and was closed, but a subsequent change of heart saw it reopen just five years later – quite right too, as there are more than enough people around the area for the station to earn its keep.

Outside one of the houses opposite the station, a man stopped tinkering with his car in the driveway to gawp at me as I got my portrait under the BR sign. Note the glistening forehead – it was really quite warm at this point.

Falmouth Docks may have declined in importance, but it’s not a bad station. Like all the stops on this line, it is reasonably clean and well-maintained. First Great Western have also installed this attractive mosaic supplied by local artists, which does a decent job of brightening the place up. It did feel a little lonely, though – for the first time on this trip, I’d found a place where I think I’d feel uncomfortable waiting after dark.

The train arrived and I climbed aboard. I had the carriage to myself until reaching Falmouth Town, which I suspect gets the lion’s share of the town’s traffic these days. 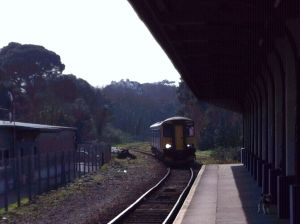 I slumped in my seat as we chugged back to Truro. I looked out the window as the places I’d visited passed by once more – Falmouth Town, Penmere, Penryn, Perranwell – but I was too tired to take it in. I arrived back at Truro in plenty of time for my onward connection to Penzance, which was to be the base of operations for my third and final day in Cornwall.