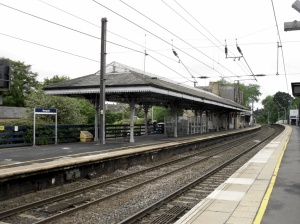 I climbed up to the upper deck of the X18 as we departed Acklington. The official best bus seats were taken up by two youths wearing baseball caps, so I took a seat a few rows behind.

The two lads were loudly discussing the criminal records of unnamed acquaintances.

“He got 18 months for manslaughter. He stabbed someone in the fuckin’ back! That’s not manslaughter! That’s murder!”

It didn’t help that the bus made a detour to serve the visitor centre of HMP Northumberland, which only served to make them nostalgic for old friends who were spending time there. Thankfully they got off at another village soon after and I then had the top deck to myself.

The X18 is a double-decker, just a little bit too large for the country roads it uses. We swerved round blind bends, the journey occasionally punctuated by overhanging tree branches banging against the windows. Helpfully, we passed through both Widdrington and Pegswood, two places I would be returning to later in the day, and I did my best to memorise where the bus stops where in relation to the stations. I also spotted something at Widdrington that I thought might come in handy later.

My next destination was Morpeth. I thought it would be as good a place as any to spend the day before resuming my journey to the other stations on the line later that day.

I got off at the bus station. First order of business: some proper breakfast to replace the melted KitKats which had been my only sustenance so far.

Morpeth town centre is full of charming cafés. I, of course, went to Costa Coffee. Look, I was starving and a chain store breakfast roll is a known quantity. 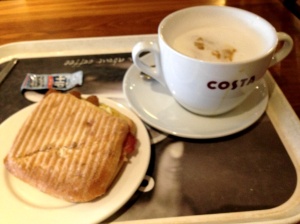 I sat down with my Russell Tovey commemorative mug and drank my coffee eagerly. For some reason, Costa existed in a weird 3G black hole, so I couldn’t check my Twitter or do any of the other things I normally do while drinking coffee.

Morpeth station was not on my list as it is not a limited service station by any stretch of the imagination. However, I decided it would be rude not to at least investigate it. The station is a little way outside the town centre, up a moderately steep hill (or maybe I’m just unfit). It has a fine station building, although only part of it is in use as a ticket office; the rest is vacant. 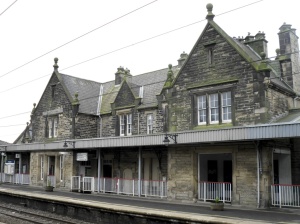 There are two treats on the platforms themselves: a gorgeous tiled map depicting the network of the North Eastern Railway, and some intricate canopy ironwork, which appeared to depict a Star of David for some reason. 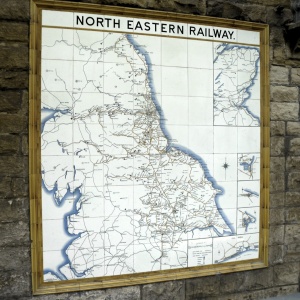 Morpeth railway station is famous for one rather grim reason: the sharp curve immediately to the west of the station, which has been the site of several serious derailments, three of which involved fatalities.

The platforms are connected by a subway. Rule number 1 of railway station subways is that they are rather unwelcoming places. Here, at least, an attempt had been made to cheer the place up with some locally-themed artwork. 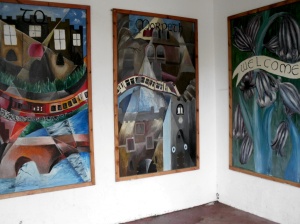 Again, this doesn’t count as a visit for my purposes, as I didn’t arrive or leave by train, but here is the obligatory sign selfie. 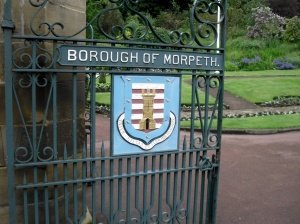 The latter is based on the work of William Turner, a 16th century physician and botanist who published several books about herbs.

His research proves stunningly accurate and relevant even today; of parsley he wrote: “The seed taketh beforehand helpeth men that have weak brains bear drink better. The use of the same maketh a man’s body savour well. It stirreth up the appetite to cold women, to endeavour themselves to conceive children.”

I plonked myself on a bench to collect my thoughts. One thing I noticed is that nearly every bench was dedicated to the memory of someone’s deceased friend or relative. “Loving father”, “dearly-remembered aunt”, “a true friend”, even two benches side-by-side commemorating a husband and wife. It all got rather depressing after a while.

Maybe if they’d been more active and not spent so much time sitting on benches, they’d have lived longer.

I wanted to see the castle, but wasn’t sure which way to go. Eventually I decided to skip it and head back towards the high street, taking the long way round via a riverside path.

I was amused by this Morpeth Town Council poster boasting about the services they provide. They’ve done it as an acrostic, but they clearly ran out of ideas by the time they got to the third occurrence of the letter “O” (On Street Christmas Lighting!).

On Bridge Street is this fabulous building, John Smail and Sons. A sign above the entrance door teased offerings from Tri-ang Railways, but sadly they didn’t actually have anything like that inside. 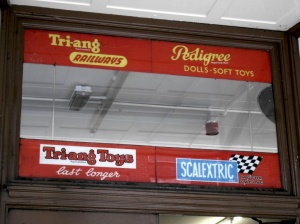 Elsewhere, the Boys Brigade headquarters had what I think is the best Jesus ever, clad in trainers and jeans. The Messiah has never looked more on trend. 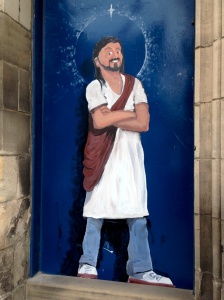 Another god-like figure was making her presence felt elsewhere: the sainted Joanna Lumley’s signature was etched in brass at the entrance to the town’s shopping centre (she performed the official opening in 2009).

By now the earlier overcast skies had cleared and the sun was beating down. I was wearing a hoodie which was far too warm, so I took it off and tucked it under my arm, where it quickly became annoying, not least because the pockets were full of stuff and I had to keep stopping to check nothing had fallen out.

I think I had experienced the best that Morpeth had to offer by this point. Unfortunately, I still had four and a half hours before my bus. Sorry Morpeth, I’m sure you’re very nice but there’s only so many times I can walk down the high street before questions start to be asked… by me, of myself.

My usual backup plan in these situations is to find somewhere to play with my phone. Unfortunately I had been a tad too enthusiastic on Instagram earlier in the day and my phone’s battery was down to 35%. My iPhone is an essential tool on any Station Master trip – for Real Time Trains, for Google Maps, and for taking the sign selfie using the front-facing camera. I couldn’t risk being without it in the evening. I had to put Twitter away.

I decided to stop for a drink. Morpeth has lots of friendly, welcoming pubs, so of course I went to Wetherspoons. Look, I was thirsty and a chain pub is a known quantity, etc. etc. 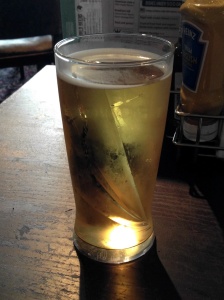 I sat there for half an hour, making a pint of Strongbow last as long as possible. It was lunchtime and the place was full of people tucking into hearty pub meals. More importantly, it was full of people who had other people to talk to.

Chasing railway stations can be a slightly lonely affair sometimes. Try to explain to people what you do and you will get, at best, a blank look. Convincing them to accompany me is a definite non-starter. Occasionally I’ve been fortunate to have friends and fellow rail fans like Scott or Ian along for the ride, but more often than not I’m left with my own company. Normally that doesn’t bother me. Today, however, I missed having someone there with me to pass the time.

I started to feel like I was wasting the pub’s oxygen, so I decided to head back to Carlisle Park to see the castle I had skipped earlier. Well, it was either that or the Bagpipe Museum.

The map of the park provided to visitors seems to bear little resemblance to the actual layout, and I walked down the wrong path twice – one time ending up looking into some back gardens of some houses adjoining the park. Eventually, however, I found the steps leading up to the castle.

Yeah, I can see how I missed that. Maybe it was my general mood at that point colouring my judgment, but I have to be honest, I was a bit underwhelmed. It’s quite small as castles go, isn’t it? Anyway, it was all locked up, so there was nothing else to do but head back down into the park and up the interestingly-named Ha’ Hill.

Ha’ Hill is a huge mound of earth which is believed to be the site of an earlier castle. Now it is used, believe it or not, to graze sheep. I staggered up to the top and got a great view of Morpeth and the surrounding countryside.

Then the sheep started eyeing me up suspiciously and I made a hasty retreat back down. “Feeling socially awkward with a sheep” – another achievement unlocked!

I headed back into the town centre and found myself in yet another coffee shop, Central Bean, guzzling yet another coffee. With my phone still switched off, I passed the time by reading the tourist information leaflets. I know more about City Sightseeing Newcastle & Gateshead than I will ever need to know in everyday life (every half-hour, 10am to 4pm, serves the Quayside at weekends only).

By this time it was 5pm. There were still 40 minutes until my bus was due to arrive, but I headed to the bus station. The gents in the bus station was festooned with England flags and had two attendants who talked very loudly to each other, which was very off-putting to me as I tried to pee.

Outside, I was tempted to try out the coin-operated vibrating chairs (coincidentally, £1 for 5 minutes is my going rate as well) but in the end I just plonked myself down on a seat to wait for my bus.

The bus arrived 10 minutes late, which only added to my general ennui, but I had a feeling there would be something to perk me up in Widdrington, besides the station itself.