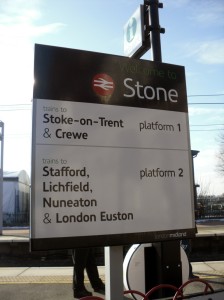 To get from the desolation of Norton Bridge to the nice-but-trainless Barlaston, Ian, Scott and I had to travel via Stone. This small market town is halfway between Stafford and Stoke, so we had to get the bus back to Stafford for a train onward.

Yes, an actual train. Stone lies on the same stretch of line as Norton Bridge, Barlaston and Wedgwood, but there is a happier story to tell here. While Stone lost its trains in 2004 along with the other stations, the bustitution here was short lived, as London Midland included the stop on their new Crewe to Euston stopping service which launched in December 2008.

Travelling from Stafford we passed through the weed-encrusted platforms of Norton Bridge again, this time at track level, arriving in Stone just a few minutes later. A good number of people got off the train with us. The station has already regained its popularity – over 48,000 people used it in 2009, the first year of the new service. 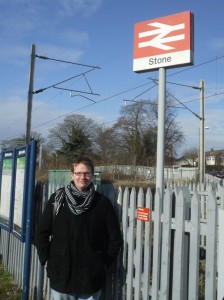 And it is architecturally quite lovely too, with a grand old station building. It dates back to the opening of the station on its current site in 1849 and is Grade II Listed. Sadly it is no longer in railway use, but now serves as a community centre.

Having grabbed the requisite station sign shot, we found ourselves with an hour to wait until the next bus onward, so we headed to the high street. Stone is a small place with one main row of shops. Pleasingly there were relatively few chain stores and a nice selection of independent retailers.

Naturally, we didn’t give our money to any of the locals, instead deciding to invade Costa Coffee. Some of us hadn’t planned ahead and brought sarnies, so they needed to buy a panini. 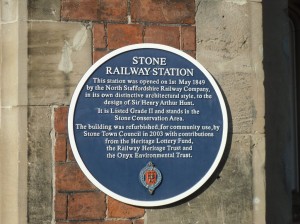 And that was it for Stone, really. It was good to see at least one railway station that had been reprieved from the ignominy of closure-by-stealth and bustitution, although I was not happy to be leaving the place on yet another railway substitute bus.

You may have noticed that I blogged about the stations in a non-chronological order. This is true – I put Stone last because I wanted this series of blog posts to finish on a positive note. Everyone likes a happy ending, right?

I want to thank Scott and Ian for coming along with me on this day. They’re great company and turned what could have been a miserable day of trudging along icy footpaths into an enjoyable experience. Of course, they are both avid bloggers and have recorded their own thoughts on the day. Ian’s is here and Scott’s is here.

I quite like Scott’s summing up of the day: “Why are we here? The answer was, to have good times like these. To laugh and chat and smile and enjoy your day with your friends. That’s a good enough reason.”

I have to be honest, though – I was mainly there for the stations. And the random bits of Network Rail engineering equipment stabled in sidings next to said stations.

5 thoughts on “Stone the Crows”