After Barlaston, our next and final station – Wedgwood – was just a short distance away. Ian suggested we walk there using the towpath of the canal, which runs parallel to the railway line.

A few minutes in, we realised this was a bad decision. We were in the middle of a cold snap, and while the roads and pavements in Barlaston itself had been mostly clear of snow and ice, the towpath was shaded from the feeble sun by trees and hedges, leaving it in a decidedly treacherous state. Slipping on ice is never a dignified way to get injured, and it’s even less appealing when there is a body of freezing water adjacent.

We pressed on, walking on the grass verges in parts where the towpath was just too dangerous. We passed a few other hardy souls, mostly dog-walkers (judging by the amount of excrement we dodged, this is a popular dog-walking route). There were alarming signs at regular intervals, warning anglers to avoid this stretch of canal, lest their rods get tangled in the overhead power cables strung in the adjacent field.

The sereneness was disturbed every few minutes by trains roaring past – an assortment of Pendolinos, Desiros and Voyagers. The frequency of services on the busy Manchester to Stafford line is such that the local service has been squeezed out of the timetable, leaving Wedgwood, like its neighbour Barlaston, without a train service.

Leaving the canal towpath, we emerged into the Wedgwood estate itself. The Wedgwood factory was relocated here in the 1940s, and the station was opened by British Railways specifically to serve the employees. The factory has declined in importance but still employs a few hundred people. No chance of them commuting here by rail now, though – no trains have called here since 2004.

High-end crockery aside, there is not much of interest at Wedgwood. Like Barlaston, the platforms have been fenced off to prevent access. Unlike Barlaston, most of the signage has been removed, including the entrance sign bearing the double arrow logo, and there are no buildings or shelters on the platform. Older photos of the station show it with shelters and BR sign, so it seems that they have been removed relatively recently. 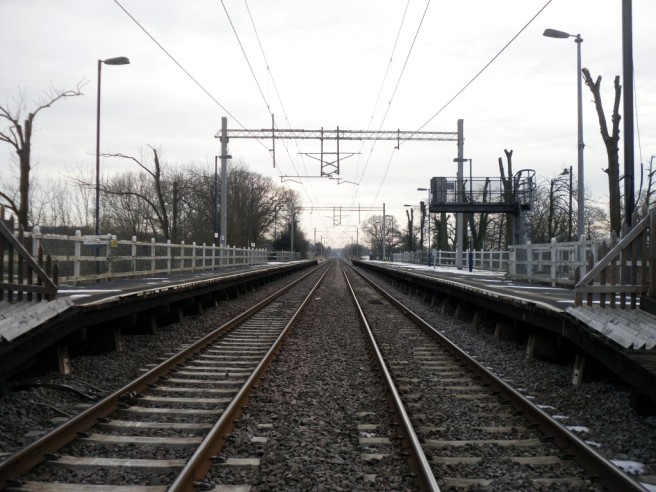 The lack of signage meant I had to be content with a photo taken while standing next to the “Welcome to Wedgwood” poster. Needs must, etc.

Really, there’s not much to see here except trains, of which there are plenty. In the ten minutes or so we were there, the level crossing barriers were lowered three times, and on each occasion two trains passed, one in each direction.

I couldn’t resist taking a few pictures as the express trains passed through. As Ian and I snapped away, Scott rolled his eyes in a mixture of disgust and pity, but… I’m used to that.

The frequency of trains caught us out at one point. As we were getting ready to leave, the barriers suddenly closed, leaving Ian stuck on the opposite side of the railway to Scott and I. This would have been amusing had I not been worrying about missing the bus to Stoke (we didn’t).

As we walked to the bus stop, I found myself questioning the need for Wedgwood to exist. The only source of traffic is the factory – otherwise, Barlaston is very close and has many more potential passengers on the doorstep. If I had to pick one station to reopen, it would be Barlaston.

My usual caveats about closing stations apply – if Wedgwood has to close, do it properly, with formal closure notices and an opportunity for locals to object. Don’t padlock the station, run a bus and pretend that’s OK.

Visiting Wedgwood, Barlaston and Norton Bridge convinced me even more of the need for High Speed 2. Opponents of the scheme say that more capacity could be squeezed out of the existing WCML, and they may be right – but at what cost? Three stations have already been sacrificed for the sake of faster and more frequent services. To expand capacity elsewhere could well require more of the smaller stations to be closed or reduced to Parliamentary level of service.

Killing local services to concentrate on express routes was the basic principle behind the Beeching report of the 1960s. It was wrong then and wrong now. HS2 will allow us to have a new high speed route and viable local trains to serve the community. We get the best of both worlds, and that’s got to be a good thing, right?

3 thoughts on “Wedgwood Jesus Do?”