Lelant Saltings is the newest station on the line. It opened in 1978 and from day one was intended as a park and ride facility — Cornwall County Council paid for the station, car park and subsidised train fares.

As a result, the car park is disproportionately large, which made its emptiness on the morning of my visit all the more obvious. Just one lonely car sat in the pay & display. I’m sure it’s a different story during the summer, but on this rainy March morning it felt rather deserted.

Lelant Saltings’ ambience is typical of 1970s stations – there isn’t any. It’s a bog standard concrete station with a small planter of daffodils plonked on the platform in an attempt to brighten the place up. There isn’t even a waiting shelter on the platform (one is begrudgingly provided in the car park). There was a small hut which I assume is for the use of a car park attendant, but it was shuttered and padlocked. 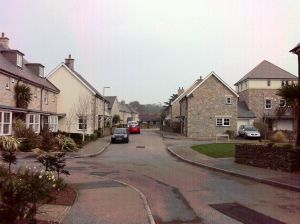 As I had half an hour or so until my next train, I took the opportunity to look around the environs. The road from the station to the main road took me through a housing estate. It looked thoroughly new and squeaky clean, like an artist’s impression from a Barratt Homes brochure. I did wonder what the residents think of people passing through all day, on car and on foot, to access the station. Then I saw a sign (and there were a few similar ones dotted around) which left me feeling slightly unwelcome.

Perhaps the locals would be more happily disposed to the railway if they could use it for commuting. Lelant Saltings has a slightly strange timetable, with the early morning trains skipping the station altogether. The first train doesn’t call here until after 9am – not much use if you need to be at your desk by then.

I got my picture under the BR sign. With not much else to do, I loitered in the area like one of those “feral teenagers” the Mail keeps going on about. Rain started to fall, so I retreated to the waiting shelter in the car park. “Shelter” turned out to be something of a misnomer – it didn’t really provide any protection at all.

An elderly couple arrived and began to inspect the timetable poster intently. An animated discussion began.

“What time is the train?” she asked.
“I don’t know,” confessed her husband, adding, “I don’t even know what station this is,” blissfully ignorant of the large sign reading Lelant Saltings directly above his head.

They continued in this vein for quite some time. I never know quite what to do in these situations. I may be in a position to help, but if I offer, I have basically admitted eavesdropping on their conversation. I loitered for a while nearby and eventually felt brave enough to venture forth with my standard question for these kinds of situations: “are you OK there, you seem a bit lost?”

After a short conversation (during which I gently pointed out the station nameboard to them) they were happily waiting on the station platform. I went back to minding my own business.

The train arrived and we set off towards St Ives. It was only just past 10am, and I had already done 40% of the stations on the branch. I was nearing the end of the line in more than one sense.

2 thoughts on “A Pinch of Saltings”