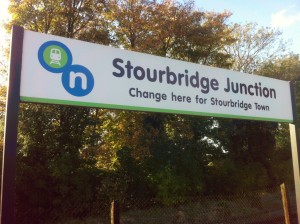 I don’t like the Network West Midlands signage font. There, I said it.

It would be perfectly acceptable on the wall of a children’s playgroup, but in railway stations that see thousands of commuters per day (most of whom are over 5 years old)? No thanks.

Besides, everyone knows that Rail Alphabet or Gill Sans are the only acceptable fonts for railway use.

Ahem. I was at Stourbridge Junction for the final leg of my truncated West Midlands trip. Stourbridge is famous for its glass industry and as the home of that well known band Ned’s Atomic Dustbin. For rail enthusiasts, however, it has a different significance. Stourbridge Junction is the starting point for the UK’s shortest branch line, the three-quarters of a mile long link to Stourbridge Town.

More on that in a moment, but first formalities at the Junction had to be dealt with. I had to get my photo under the station sign. Stourbridge Junction has a huge car park with no immediately obvious exit. I walked some distance, crossing a footbridge which led into another car park, before finally reaching the junction with the main road, where – thankfully – I found a sign. A disaffected youth stopped kicking an empty drinks can around to regard me with a mixture of suspicion and pity while I took the photo.

Where was I? Oh yes, the Stourbridge Town branch. As you might suspect, Stourbridge Junction is quite remote from its namesake town. Fortunately for the good folk of Stourbridge, there is a short branch line which penetrates right into the heart of the town centre, with a train operating every ten minutes throughout the day.

Given the number of stations which are miles from the centres of the towns they serve, with passengers left to make the final schlep under their own steam, it seems odd that Stourbridge has the luxury of a dedicated branch line. As usual in these cases, the current situation is a quirk of history. The line was built to carry freight, with passenger service as an afterthought. The goods traffic dried up, leaving the short passenger shuttle as the only service on the line.

Until fairly recently, a full-size train was employed on the branch. However, someone spotted that this was a bit of a waste of resources and looked around for another solution. This came in the form of the Parry People Mover, a lightweight railcar powered by a small diesel engine, which uses a flywheel to store energy for later use, making it more efficient than a conventional train for the short run up and down the branch.

There is still the standard two-person crew of a driver and guard. On the outward trip, a third member of staff (function unknown) was present. I’m not sure how this saves London Midland any money, especially as the guard’s ticket machine was broken so she couldn’t issue any tickets. 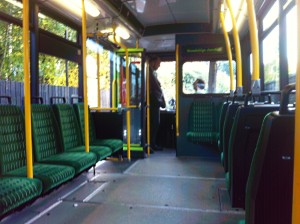 Internally the Parry People Mover is unlike any rail vehicle I’ve ever seen. It’s more like a small bus than any train. No separate cab for the driver, either – he sits with the passengers.

We set off, lurching and bouncing along the track. The branch line is jointed track all the way, and every joint translated into a sharp jolt right up my spine. I found myself yearning for the smooth ride of a Northern Rail Pacer. It’s acceptable for the journey length – three minutes – although I’m not sure how people would react if this type of vehicle were to be introduced on other lines (they are proposed for the Ellesmere Port to Helsby branch, amongst others). 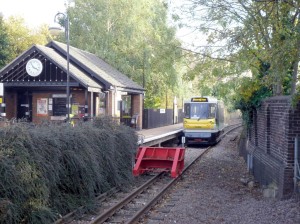 Soon we were slowing to a halt in the tiny Stourbridge Town terminus. The current station is the second to bear the name; the original was demolished and the line cut back slightly to allow for construction of a bus station. It’s a nice enough environment, with a small waiting shelter and a ticket office, which was sadly closed – again, London Midland, if you’re looking to save money on staff, you might want to look at why three people are needed to run what is essentially a milk float on rails a few hundred yards.

I paused to get my photo under the station totem. Again, I found myself being watched, this time by an unpleasant-looking unwashed man who was asking passers-by for cigarettes, I got the money shot and escaped as quickly as I could, through the bus station and into Stourbridge town centre.

The subway brought me out onto what appeared to be the main high street. I love the “gateway” that they have put up here. It’s far grander than it should be for a station of this size, but that makes it all the better.

It was getting on for 3pm and I hadn’t eaten lunch. My main mission now: find something to eat. There was a Romino’s Pizza (full marks for creativity there) near the station, but it was closed, so I pressed on into town.

I had an hour to look around Stourbridge. It’s an OK place. Plenty of shops, with plenty of people passing through – just as it should be on a Saturday, in fact.

I liked the sturdily-built red-bricked town hall, too.

There were various cafés available but, being a boring sod, I opted for a takeaway pasty and a bottle of Pepsi Max from a bakery. Suitably nourished, I returned to the station, leaving a trail of pastry crumbs behind me.

I boarded the shuttle train for another bumpy ride to the Junction station. While waiting for my main line train back to Birmingham, I noticed the tiny little shed where the branch trains live. It is adorable. I kept expecting the doors to open and Toby the Tram Engine to pop out. 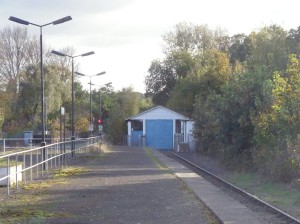 6 thoughts on “Town and Around”