London’s Underground network teems with abandoned sections to tantalise the railway enthusiast. The Epping-Ongar line and the Aldwych branch are probably the two most well-known examples of routes which have closed after outliving their usefulness.

Even more interesting to me, however, are the lines which were planned but then abandoned. Most never even got off the drawing board, but some reached quite advanced stages, with construction work taking place before the eventual plans were dropped.

So, on a rainy Sunday morning, I was taking photographs of an abandoned station platform through a barbed wire fence.

These are the high level platforms at Highgate, built in the late 1930s to accommodate a proposed new extension to the Northern Line. The Northern Heights scheme was an ambitious project to modernise some of North London’s steam-powered railway lines and incorporate them into the Tube network. Had the extension proceeded, Northern Line trains would have run from Alexandra Palace to Highgate, then on to Finsbury Park to link up with the existing Northern City Line tunnel to Moorgate.

Not long after the works began, however, World War II broke out, forcing the curtailment of the scheme after only a few sections were completed (to High Barnet and Mill Hill East). The scheme was never restarted after the war, and the steam service was soon withdrawn.

I think it’s fair to say this is the worst thing Hitler ever did.

I was in Highgate at the invitation of my friend Ian Jones, author of (among other gems) the 150 Great Things About The Underground blog. Ian had suggested a couple of days in the Capital to explore some of its transport delights – both well-known and hidden. We had spent Saturday poking around the glorious St Pancras International and also various delights on the Piccadilly Line, before moving on to the Northern Line on Sunday.

Ian was also on hand as photographer, so this blog entry has better pictures than the usual “camera in face at arm’s length” shots.

The former railway line has now been converted to a public footpath and nature reserve, the Parkland Walk, “maintained” (although I’m not sure if that’s the right word) by Haringey Council. Ian and I decided to walk the route from Highgate to Finsbury Park, a fairly leisurely stroll of just under two miles, to see what treasures we would find therein.

The Tube-style “line diagram” at the park entrance was a nice nod to the line’s history.

As Ian and I walked from the station to gain access to the footpath, we were overtaken by a jogger. His legs were covered in mud, and I did wonder how he had managed to get so muddy. It wasn’t long before we found out.

The next railway relic was encountered as soon as we entered the park. Two tunnel portals, which once carried steam trains into Highgate station, but now sealed off. The tunnels were designed for main line steam trains (with extra height to allow the steam and soot to dissipate) and would have dwarfed a Tube train, had they ever run through them.

As we continued along the path, the reason for that jogger’s muddy legs soon became clear. It had been raining heavily and the drizzle was persisting. The dampness, combined with the constant passage of joggers and dog-walkers had left the path churned up into a muddy mess, complete with wide, deep puddles of water that had to be dodged or athletically leapt over.

Flanders & Swann were incorrect. There is nothing glorious about mud at all. I certainly could have done without squelching through and slipping on it as I progressed. I know budgets are tight, but come on Haringey Council, show a bit of pride and put down some tarmac.

As we trudged on, we were regularly overtaken by joggers. Jogging does seem to be a great social leveller – people of all ages, sexes and walks of life had squeezed themselves into tracksuits for a run. Hats off to them for coming out in fairly rotten weather to stick to their keep fit regimen – although, given the conditions in the park itself, it’s entirely possible they were actually training for the Tough Mudder.

A shrill voice came from the distance. It belonged to a middle-aged woman walking her dog. Actually, “walking” is not the right word. The dog was running away from her, with a five-metre-long lead trailing behind it. She was attempting, unsuccessfully, to get the hound under control.

I have a few questions about this, but foremost in my mind was: what sort of name for a dog is Boris? Did she (shudder) name him after the Mayor? Perhaps I was influenced by the fact that I only heard it shouted in a shrill, eardrum-piercing sing-song voice, but I was not impressed.

We quickened our pace to get away from her, and soon reached the first station on the line, Crouch End, where the platforms were still extant, but not much else. The brick “towers” on the road overbridge (below right picture) are interesting – are they original or a post-closure addition?

Boris had caught up to us. He bounded up inquisitively and ran around our feet. In the process his lead, still trailing on the floor, got wrapped around my leg. I was standing on the edge of the platform and had a momentary fear that Boris would drag me off into the mud. His owner finally appeared and untangled me. She apologised in that “haha it’s funny really” way that people do. I was not amused.

Fortunately Boris and his owner left the path at this point, so Ian and I were free to continue our walk unmolested.

A little further down the line, we encountered this monsterous sculpture emerging from the retaining wall in a cutting. This is a depiction of a Spriggan, a creature from Cornish folklore. The sculpture is by Marilyn Collins.

Nearby, further evidence of the abandoned electrification can be found. This massive building was designed to hold the electrical switchgear for the line. It has since been repurposed as a community centre, with some more modern additions bolted on to it. 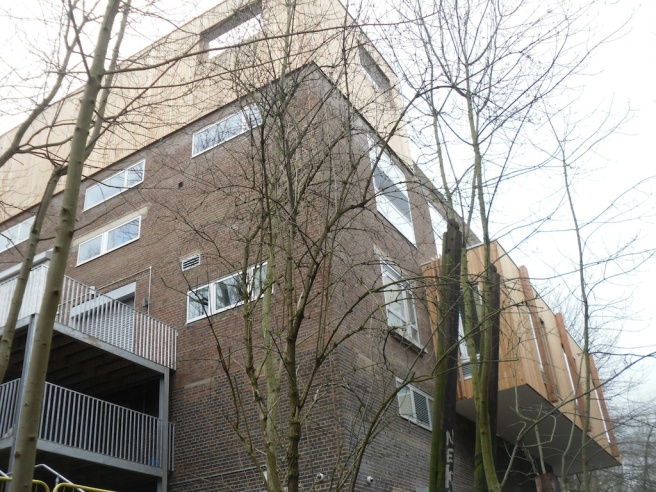 We pressed on, passing a graffiti artist happily spraying away under a bridge (tuts of disapproval all round). Judging by the amount of grafitti we saw, he wasn’t the first and won’t be the last. At least he was wearing a mask (safety first, and all that).

Beyond this point the line climbs, and soon we found ourselves on an embankment, looking down into people’s back gardens. I felt like a bit of a voyeur – at least when you’re on a train, you pass by at speed so any possible glimpse is fleeting at best. There were no scandalous sights on view, however – a rainy Sunday afternoon is not the time for garden pottering.

With less vegetation to shield the ground from the rain, the mud was even worse at this point. Not that the joggers were deterred – we continued to encounter them frequently.

The other intermediate station on the line was at Stroud Green. There’s no trace of the platforms, although the station building at street level survives. The station was near to the point where the line passes over the London Overground’s Gospel Oak to Barking line. Crouch Hill station is not far from here, and so this could have been a useful interchange.

We were nearing the end of our walk now, and soon Ian and I were approaching Finsbury Park, where the route ends just north of the station. There was a junction with the East Coast Main Line here. Even here there was interest, as engineering works were taking place on the line, with a ballast train and a multitude of Network Rail contractors visible as we crossed the bridge.

It was most agreeable to enter Finsbury Park and find ourselves walking on a solid, non-muddy path. I (and my shoes) were most grateful.

That was the end of our walk, and all that was left was for Ian and I to head to Finsbury Park station for a train back into central London and a well-earned Nice Cup of Tea and a Sit Down. We eschewed the “rea Northern Electrics” in favour of the Victoria Line, but not before getting another station sign pose to bookend our journey.

There was also an Arsenal FC shop next door to the station, but my allegiance in the North London football rivalry is with whichever team has Gareth Bale on their side, so we’ll gloss over that.

All in all, the Parkland Walk is a tantalising glimpse of what might have been. The north end of the Northern Line would certainly have looked drastically different had this line remained in railway use. London isn’t short of railway lines, so it could be said that in the grand scheme of things this two mile stretch isn’t missed, but it would have opened up numerous new journey possibilities.

On the other hand, the footpath is now an agreeable way for two friends to spend a Sunday afternoon. If it can’t be a useful public transport link, I suppose that is the next best thing.

3 thoughts on “Friends in Highgate Places”